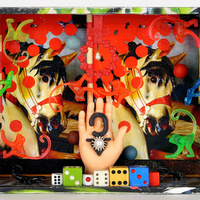 Gallery exhibition of assemblages of collected objects that explore the absurd.

In a series of assemblages depicting the middle of an unfinished short story, Tom Greaves challenges the viewer to question what is real and what is fake as we consider how our unintentional and perhaps unknown biases shape what we believe to be the truth. In sculptural constructions, from an ongoing series which began in 2016, the Washington, D.C. based artist arranges found and collected objects, images, textiles, plastics, paint and other media to capture frozen moments exploring social, political, economic, cultural, environmental, and other issues in scenes infused with a subversive sense of humor.
In his solo exhibition, Middlemost Daft, Greaves presents selections from three years of work which began as he was preparing to move his studio. Rather than pack up the many objects he had collected, for one reason or another over a period of many years, he started to arrange them in smaller boxes. Greaves was drawn toward the absurd in the creation of this work, likely a response to the changing cultural landscape which made him feel somewhat helpless against the lies, hatred and pettiness coming from those who lead and those who follow. Each piece portrays the turning point in a specific narrative which is meant to challenge our notions of what may or may not be true.

About the Artist: Tom Greaves is a native of Canton, Ohio who graduated from The Art Institute of Pittsburgh with a degree in Visual Communication and completed The Corcoran School of the Arts and Design curriculum for Advanced Figure Sculpture and Advanced Metal Sculpture. His 35-year career as a professional artist has included work in graphic design, illustration, drawing, painting, printmaking, and sculpture. Greaves lives in the Capitol Hill neighborhood of Washington, D.C., where he maintains his studio practice, and is currently a member of Sparkplug collective, a 2-year program sponsored by the District of Columbia Arts Center. He has exhibited his work regionally, nationally and internationally. To learn more about the artist, please visit his website:
www.tomgreavesart.com