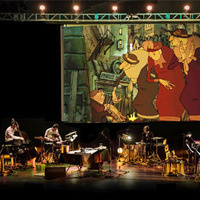 The Triplets of Belleville Cine-Concert

In 2003, the animated French feature The Triplets of Belleville swept the globe, racking up dozens of awards and nominations—not to mention the hearts of countless admirers—along the way. Much of it came down to the Oscar-nominated score by Benoît Charest, which grabbed audiences by the ears and dragged them into the streets of 1920s Paris and Le Jazz Hot. Charest is back; with Le Terrible Orchestre de Belleville, he recreates live the original score as the film itself is beamed onto the big screen.