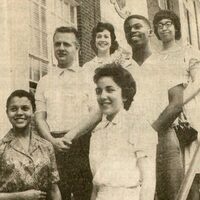 The Effects of Brown vs. The Board of Education in Montgomery County *Virtual Event*

For nearly a century, schools for black students in Montgomery County (and indeed most of the country) were denied the benefits provided to their entirely separate, but supposedly “equal,” white counterparts.  In facilities, supplies, monetary support, wages, term length, and academic standards, black schools lagged far behind, despite the stringent efforts of their communities to achieve equal educational rights.

In 1954, the unanimous Supreme Court decision in Brown vs. the Board of Education of Topeka, Kansas changed the face of MCPS forever.  Segregated public schools were now illegal, and every school system in the country was to proceed with integration at “deliberate speed.”  After much investigation and discussion, the Board of Education began a gradual process of integration, beginning with a few schools in September of 1955. Only two schools, one up-county and one down-county, registered any official protest.  For the most part, integration happened smoothly, if slowly, and the school system was declared fully integrated in 1961.

Montgomery County’s population continued to grow and change, however, and issues of integration and diversity have remained central to our school system ever since.  A number of solutions have been implemented, such as the Magnet programs, with varying degrees of success.  The effects of Brown vs. the Board of Ed are still being felt today, fifty years later.