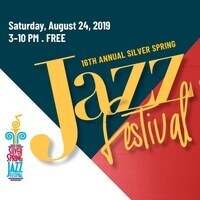 THE FREE FESTIVAL INCLUDES TWO STAGES OF LIVE ENTERTAINMENT WITH ADDITIONAL PERFORMANCE BY ARTISTS SUCH AS THE MARCUS JOHNSON PROJECT, THE ERIC BYRD TRIO, PAUL CARR AND THE REAL JAZZ AMBASSADORS, AND MORE!

Arturo Sandoval, a protégé of the legendary jazz master Dizzy Gillespie, was born in Artemisa, a small town in the outskirts of Havana, Cuba in 1949, just two years after Gillespie became the first musician to bring Latin influences into American jazz.  Sandoval began studying classical trumpet at the age of twelve and has evolved into one of the world’s most acknowledged guardians of jazz trumpet and flugel horn, as well as a renowned classical artist, pianist and composer.