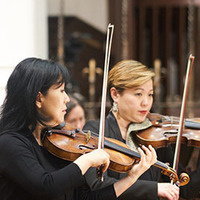 ’Tis the season to think outside the Bachs with a family-friendly musical tour spanning the entire globe!

We’ll start out in Brazil with Heitor Villa-Lobos’ Bachianas Brasilerias, which combines Brazilian folk and pop music with Bach. Soprano Laura Choi Stuart then leads us to Germany with Bach’s Cantata BWV 51. France is next with Bizet’s Jeux d’Enfants, a collection of whimsical songs inspired by children’s games. And our grand finale brings us to Russia and one of the most beloved of holiday traditions, Tchaikovsky’s Nutcracker Suite. You’ll be in the holiday spirit in no time!