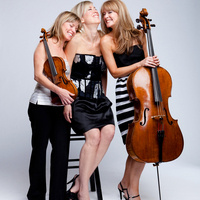 The acclaimed Eroica Trio, winner of the prestigious Naumberg Award, teams up with the National Philharmonic for a performance of Beethoven’s Triple, one of the most unusual concertos in the Western tradition. It is a work of irresistible appeal, at once intimate and symphonic in style.

The “Eroica” Symphony, composed in 1803-04, is a groundbreaking work in Beethoven’s stylistic development, bringing together classical control and romantic exuberance. Famously, Beethoven had originally dedicated the work to Napoleon Bonaparte, in recognition of what he thought were Napoleon’s democratic ideals. The dedication was scratched out, however, after an angry Beethoven discovered that Napoleon proclaimed himself Emperor of the French, and the title “Eroica” was used instead.