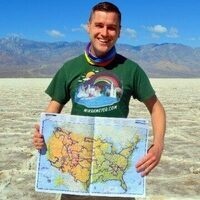 In 2016, adventurer Mikah Meyer launched a journey to experience all 418 National Park sites, attempting to become the youngest person to experience every unit and the sole person to do so in a continuous journey. His odyssey began as a way to mark his father’s passing from cancer and honor his dad’s love of road trips. Meyer began blogging his journey, taking audiences along with him on his trek across America’s public lands. Along his journey he has shed an important light into the LGBT experience in the outdoors industry and become an inspirational voice encouraging people to live their dreams. His journey is scheduled to be completed in April.

Similarly, the National Park Service (NPS) is on its own mission to promote inclusion in the outdoors.  Sangita Chari, oversees the NPS’s Office of Relevancy, Diversity and Inclusion.  The office was formed in 2013 to address the underrepresentation of diverse racial and ethnic groups among National Park staff and visitors. Chari will share insight into the steps NPS has implemented and the agency’s future plans to ensure that the national parks remain relevant and open to all Americans.

The presentation will be followed by a question-and-answer session.

REGISTER in advance to receive a complimentary boxed lunch.