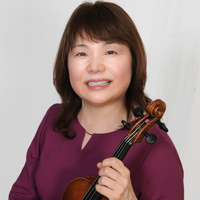 Ms. Pawel has performed solo and chamber concerts in Japan and the United States, including a performance for the Royal Family at Emperor’s Palace and the Japanese Embassy in Washington, D.C. She is a former member of Cezanne Trio, National Philharmonic, and Washington Ballet Orchestra.

Admission by donation for the artist at the door.

Free parking in the large lot off of MacArthur Blvd. Proceed to Washington Conservatory of Music at the far end of the South Arcade building (near The Irish Inn).