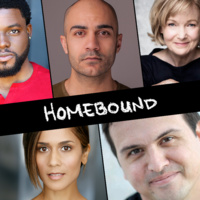 Round House Theatre is bringing together DC-area playwrights, actors, and designers for Homebound, an original webseries that explores life under Stay-at-Home orders in the Nation’s Capital. These ten-minute episodes will air over ten weeks between April 27 and June 29. Homebound will star Round House Theatre resident artists Craig Wallace and Maboud Ebrahimzadeh, plus seven local artists who lost work with Round House as a result of the cancellation of the theatre's spring shows. Round House Theatre has paired those artists with ten of DC’s leading playwrights, each of whom will pick up on the prompts offered in the previous writer’s episode, writing a story that the actors can film themselves at home. These episodes will be supported by four of Round House Theatre's incredible designers and directed by Round House Artistic Director Ryan Rilette and Associate Artistic Director Nicole A. Watson.  Explore the full cast and creative team below!

Homebound is part of Round House at Your House, our new slate of free digital programming that is fully funded by new contributions from the Round House Board of Trustees.