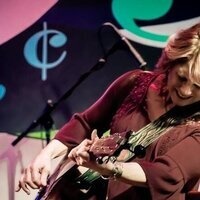 What could be better than having one of the biggest folk artists performing an exclusive evening of chart-topping hits at FOCUS Music’s latest show at the Tikvat Israel Congregation? How about two? On Sunday, February 10, Meghan Cary and Scott Wolfson & Other Heroes will perform at the famed music series to play songs from their latest renowned albums.

During the show, Cary will be joined by her husband and keyboardist Peter Farrell as well as multi-instrumentalist Bob Beach for the performance. Her new record Sing Louder, which debuted among the top 10 on the US / International Folk DJ Radio Charts, is being played at mainstream radio in more than 40 markets throughout the country and in Canada.

One of her biggest supporters is radio host John Platt from WFVU 90.7 FM. He says, “These times require songs of compassion and commitment and Meghan Cary has several, especially 'Sing Louder' and ‘Responsibility’, which inspire us to reach for our higher selves. And Meghan sings them with such infectious joy you can’t resist joining in."

“My favorite part of any show is when the audience starts singing back at me,” said Cary. “The energy in the room shifts – it’s a thing that can only happen in a live music situation, and I think it’s good for the world.”

Cary, whose debut album earned her Billboard magazine’s “Critic’s Choice Award” for “Best Newcomer,” is one of the folk industry’s most sought-after artists. Her raw honesty and ability to connect with her audience through high-energy tunes, masterful storytelling, and deeply personal lyrics has captivated fans for more than two decades. Now, with the recent release of her latest album Sing Louder, she has inspired others to raise their voices with her to create an authentic connection through music.

Scott Wolfson & Other Heroes has also earned rave reviews, accolades and airplay throughout the Northeast over the past six years and two albums. Described as “welding folk, blues, country, Broadway, and rock’n’ roll into a smart, rootsy, compelling sound,” the band has been lighting up stages with their high-energy brand of multifaceted Americana music since 2011.

Their latest record Welcoming The Flood, was released in 2016 and was hailed as “a tight, fast musical tapestry” by No Depression.