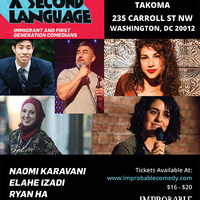 Comedy as a Second Language

Comedy as a Second Language is back! We make our first ever appearance at Busboys & Poets in Takoma Park on Thursday, April 4th at 7pm and 9pm. Join us for a night of amazing stand-up comedy with the funniest immigrant and first generation performers! This will be a hilarious night of comedy with Naomi Karavani, Ryan Ha, Elahe Izadi, Danny Rolando and Yasmin Elhady.