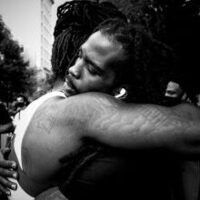 Cheriss May: Beyond The Protest

Cheriss May is a lauded portrait and editorial photographer based in Washington, D.C. Her work tells those stories of marginalized people and issues — the "hidden figures” — and currently centers on the intersectionality of race, politics, and protest, in the wake of the national reckoning on racial injustice. Her work has appeared in O Magazine, The White House Historical Association, The New York Times, Bloomberg, Time, ABC News, The Today Show, and MSNBC. May’s work is featured in a permanent exhibit: MFON's “In Conversation: Visual Meditations on Black Masculinity” at the African American Museum in Philadelphia. May is the president of Women Photojournalists of Washington and is an adjunct professor at Howard University, her alma mater. She was selected as an Adobe Education Leader for her commitment to creativity in the classroom, and she trains and speaks to educators across the country. As an advocate for diversity and inclusion in the media industry, she is often commissioned to speak about inclusive storytelling. Originally from Kansas City, May earned her BA in Communications and Advertising from Howard University in Washington, DC. Learn more on her website: www.cherissmay.com