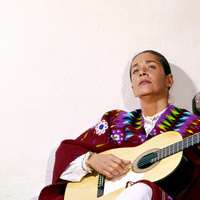 Through its lyrical structure, CHAVELA takes viewers on an evocative, thought-provoking journey through the iconoclastic life of game-changing artist Chavela Vargas. Centered around never-before-seen interview footage of Chavela shot 20 years before her death in 2012, and guided by the stories in Chavela’s songs, and the myths and tales others have told about her –  the film weaves an arresting portrait of a woman who dared to dress, speak, sing, and dream her unique life into being

"Just as Vargas, who died in 2012, stripped away costume froufrou, she peeled singing down to its essence. Celebrating a great ranchera interpreter without sugarcoating her, this straightforward film honors her approach." - Sheri Linden, Los Angeles Times

"Chavela feels as musical as its subject, an aesthetic composition as much as a biographical document." - David Alm, Forbes

"Loaded with concert footage, interviews with friends, and terrific photos, this well-balanced documentary directed by Gund and Daresha Kyi celebrates the woman and the legend..." - Jay Weissberg, Variety

"The result is something intimate—a film depicting not only her life in terms but perhaps a bit of her soul, too." - Jacob Seferian, Alt Citizen

"Mesmerizes with its impressionistic blend of archival photos, musical performances, concert footage and candid interviews with the legendary singer herself, as well with her ardent friends like Pedro Almodóvar and former lovers." - Claudia Puig, TheWrap