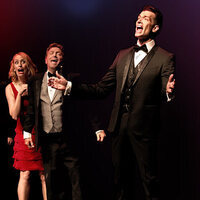 Described as Whose Line Is It Anyway? meets the TONY Awards, the hilarious Broadway’s Next Hit Musical is the world’s first and only unscripted theatrical awards show. Master improvisers gather made up, hit song suggestions from the audience and create a spontaneous evening of music, humor, and laughter. The audience votes for its favorite song and watches as the cast turns it into a full-blown improvised musical—complete with memorable characters, witty dialogue, and plot twists galore.