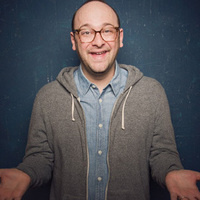 Comedian Josh Gondelman takes a break from his gig as senior writer on Showtime’s Desus & Mero to take the mic at AMP. The celebrated comedy writer has scored two Peabody Awards and three Emmys for his work on Last Week Tonight with John Oliver. He is also the mastermind behind the Shorty Award-winning Modern Seinfeld Twitter account, and his writing has appeared in The New Yorker, McSweeney’s, and other prestigious publications. You also may have seen him on Conan and Late Night with Seth Meyers. Onstage, Gondelman charms audiences using his good-natured storytelling and cracks them up with his sharp, pointed wit. He takes topics from surprise parties to his experience teaching preschool and makes them all equally hilarious.