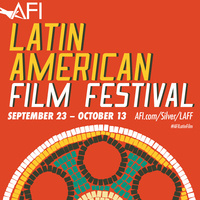 Be part of a diverse community of filmmakers and film lovers and celebrate Hispanic Heritage month with new Latin American cinema. Puchase tickets or a pass today!