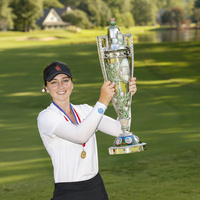 The first Women’s Amateur Championship was played in 1895.

On November 3, 2017 the USGA publicly announced Woodmont Country Club as its choice to host the 2020 U.S. Women’s Amateur Championship.

This is an exciting time for Woodmont having been selected for the prestigious honor. While the Club has hosted several premier golf tournaments in the past—including 30 U.S. Open sectional qualifiers—this will be Woodmont’s first time hosting a U.S. Golf Association (USGA) championship.

Considered the most prestigious event in all of women's amateur golf, the U.S. Amateur boasts an impressive roster of players.

Many U.S. Women's Amateur champions have gone on to success in professional golf, including Woodmont Country Club's own, Morgan Pressel.